There is a new pizza place in town!

But first, a bit of history. Zzetta occupies a corner of a site that was formerly the historic Rathbone Market, one of the most famous East End markets in the 90s. But the council sold off all the land for a £5 billion regeneration. As a result, the area has been overtaken by the concrete, glass and steel of high rise new build flats. The market still exists today, but only a skeletal version, running over limited days and with a handful of traders.

So when Zzetta arrived on the scene, needless to say it did not resonate well with the locals. Existing residents were unsure how another new pizza place would benefit the community. Zzetta therefore had to be very mindful of the history and the sensitivity of the location. They wanted to do something that involved the locals rather than alienate them and therefore they dedicated the pizzeria to the market.

Which brings me nicely to the well-considered interior design of this place (designed by Akash from Block Studio). The concept is ‘Bringing the Outside In’ – a nod to the market that existed previously. The walls are mostly grey and black, offset by blonde wood furniture. Sustainable chipboard panels are used throughout the scheme to soften and contrast the dark, hard surfaces. The French Oak tables are arranged to look like stacked up crates to mimic the market and there are pops of greenery to pep up the space.

At the far end is the open kitchen with the shiny, flaming pizza oven, the beating heart of the space. 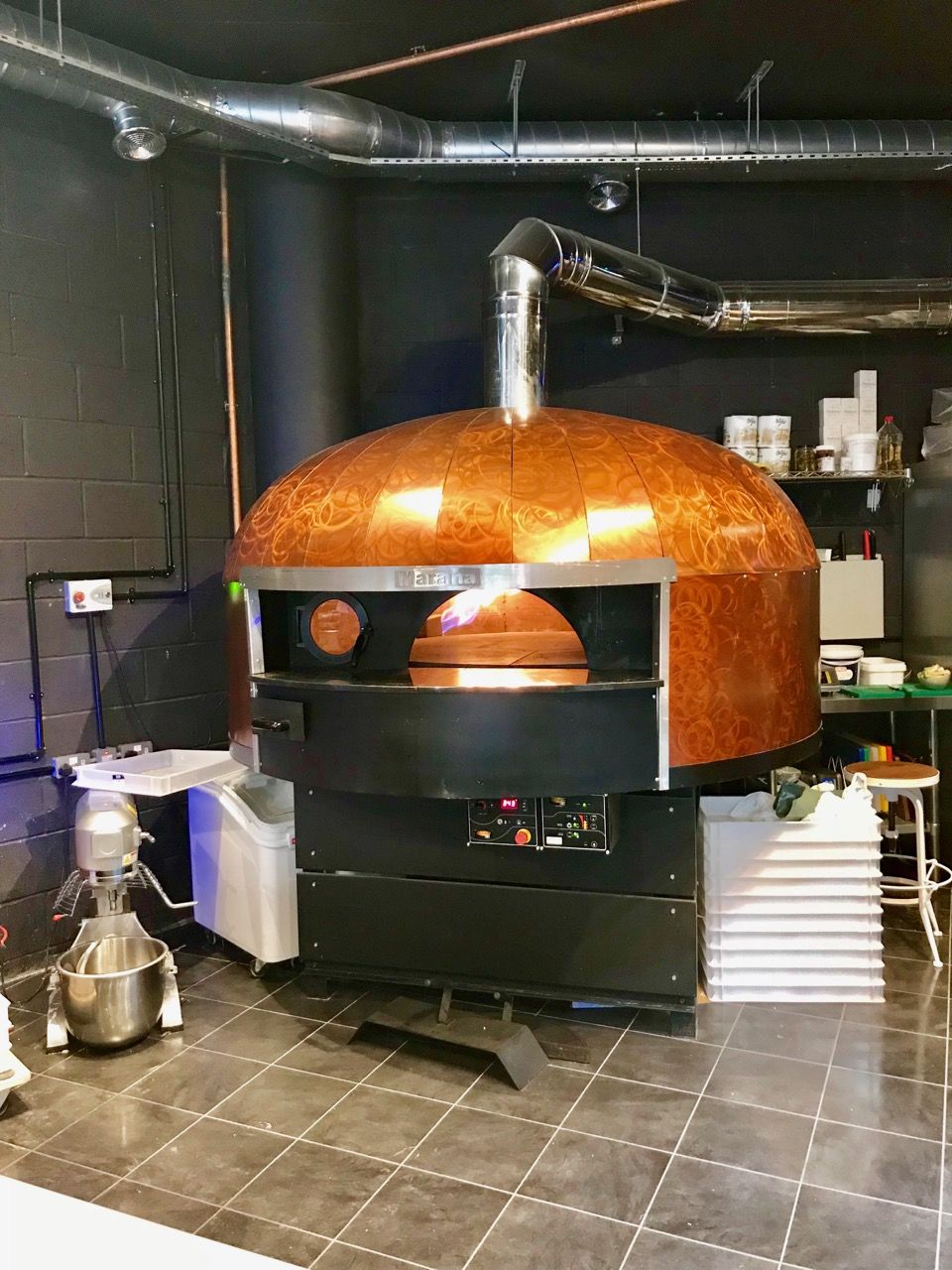 A key feature are the 54 ply boards that hang from the ceiling shaped like speech bubbles. These are quotes from local residents who were born and lived in the area for many years. It is their words, their emotions and childhood memories of the market. So in a subtle way, Zzetta tries to acknowledge and embrace the community it is part of through its design. 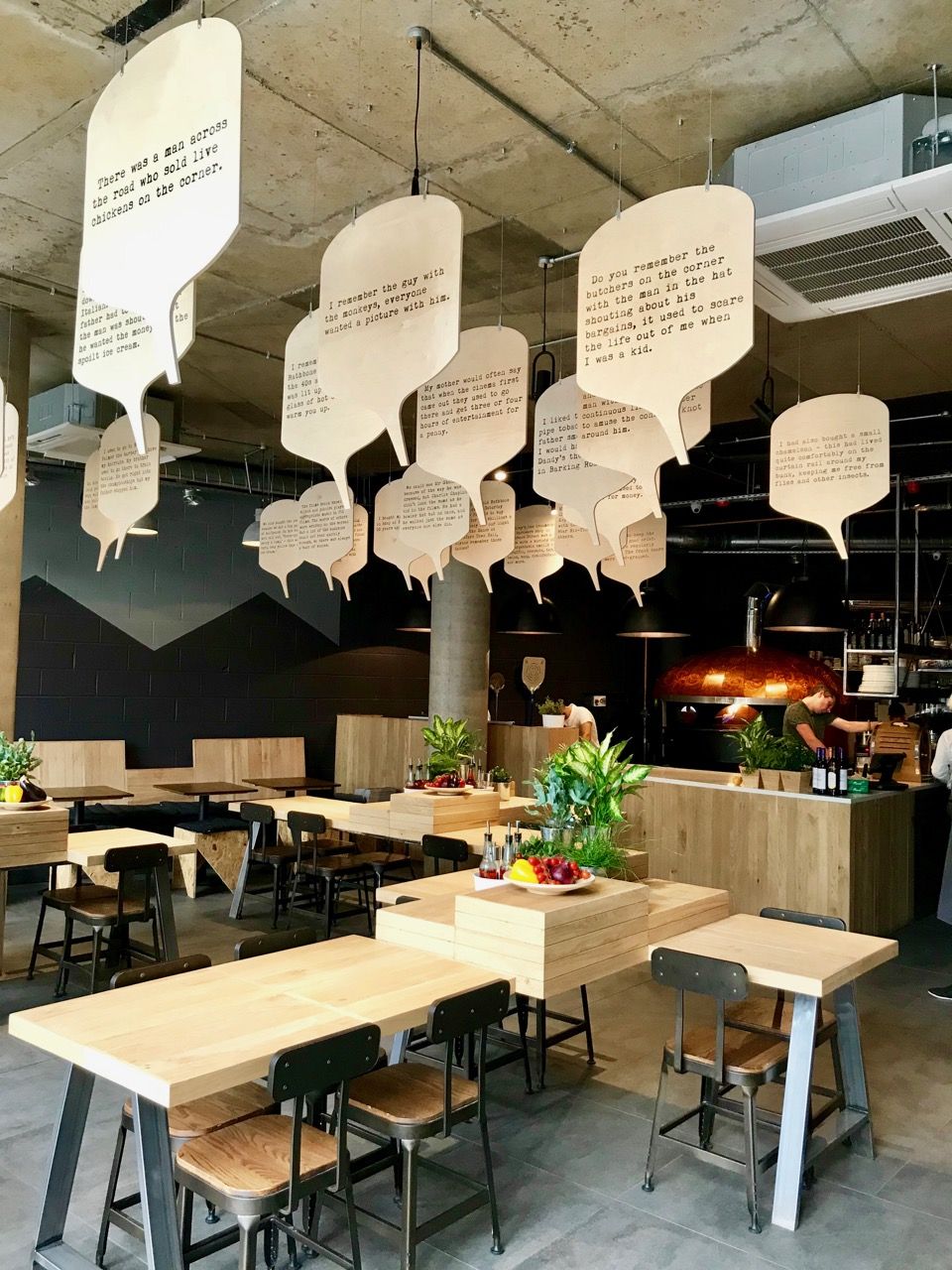 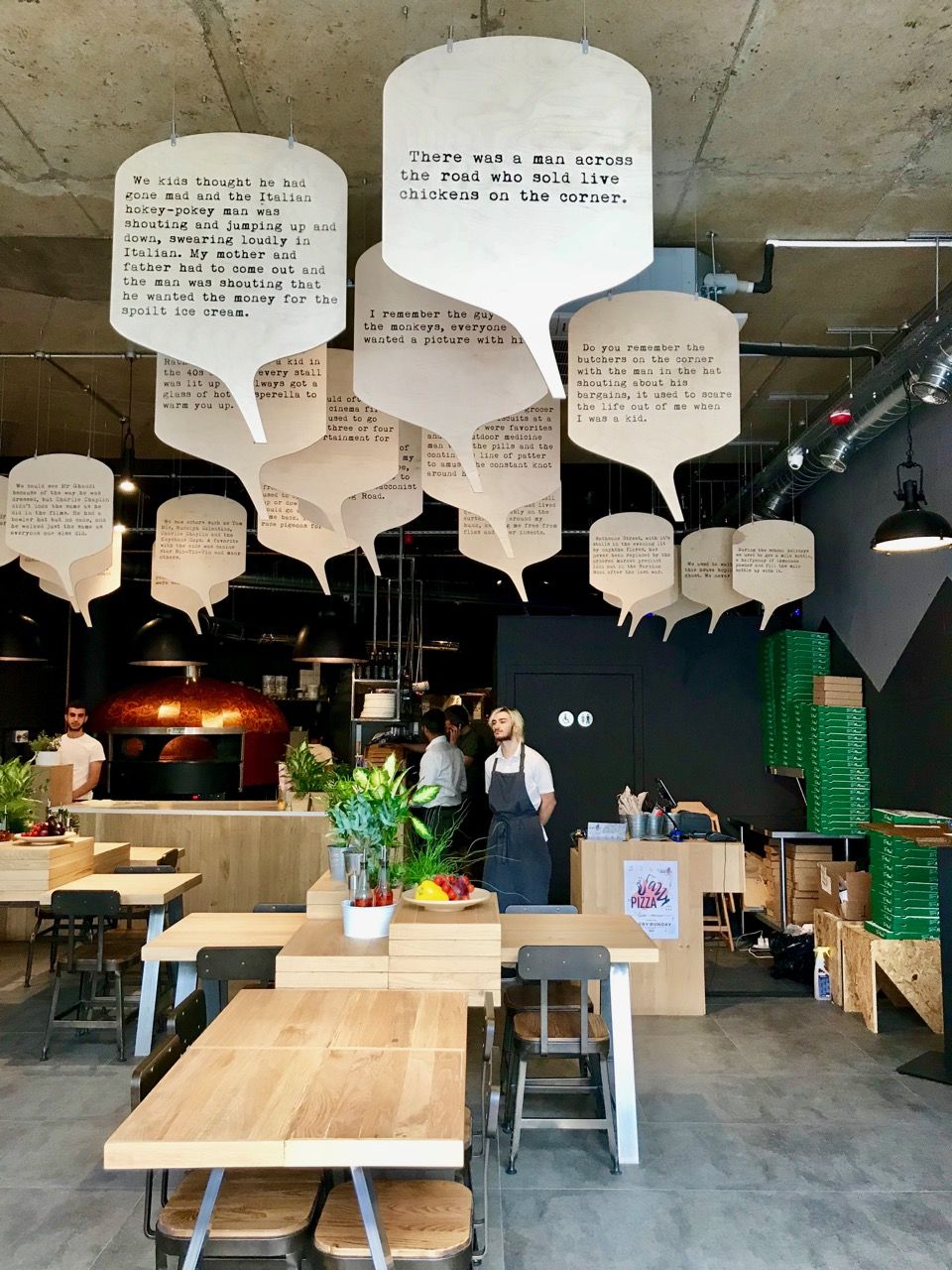 During our visit, we had a chat with owner and founder Rob, for whom this is his first hospitality venture. The name Zzetta is inspired from Pizzette (small pizza). Even though Zzetta has been open for a couple of weeks, he and his team have been perfecting the recipes and techniques over the last six months and it’s still a work-in-progress.

Rob’s background was in shipping and logistical support to continental suppliers. As a result, he got to know a lot of traders and suppliers. It is this expertise that is reflected in the ingredients used here. The dough is not shop bought and frozen; it is their own in-house creation and they even grow their own yeast. They only use good quality Italian flour and the fermentation process takes hours (involving three different stages) to bring out the flavours and texture. Most ingredients are either local and if not local, all the way from Italy. For example: the cheese that they use here – Fior di Latte. In the hierarchy of Italian Mozzarella, this one sits on top. We were convinced it was an Italian import but we were surprised to hear they buy it from a local Italian family in Essex. Everything is natural and free from preservatives. The term ‘soul-fired’ comes from the hard work that goes into making each of these pizzas. The process is long and meticulous and needs huge amounts of focus and patience. There are no cutting corners or shortcuts here.

So how did the food fare?

We had a healthy start with their recommendation – The Zzetta Salad (£4.95) – Seasonal Vegetables, Mixed Peppers, Red Onion, Cucumber, Avocado, Young Tomato, Pumpkin Seeds and Vinegar Dressing. It was a big portion, easily shareable between two as a side or a main for one. It came with a dinky pot of dressing that you can pour at the table according to your taste and preference. The leaves were fresh and snappy, roughly tossed together. The resulting jumble was colourful and crunchy, with the best versions of every ingredient. 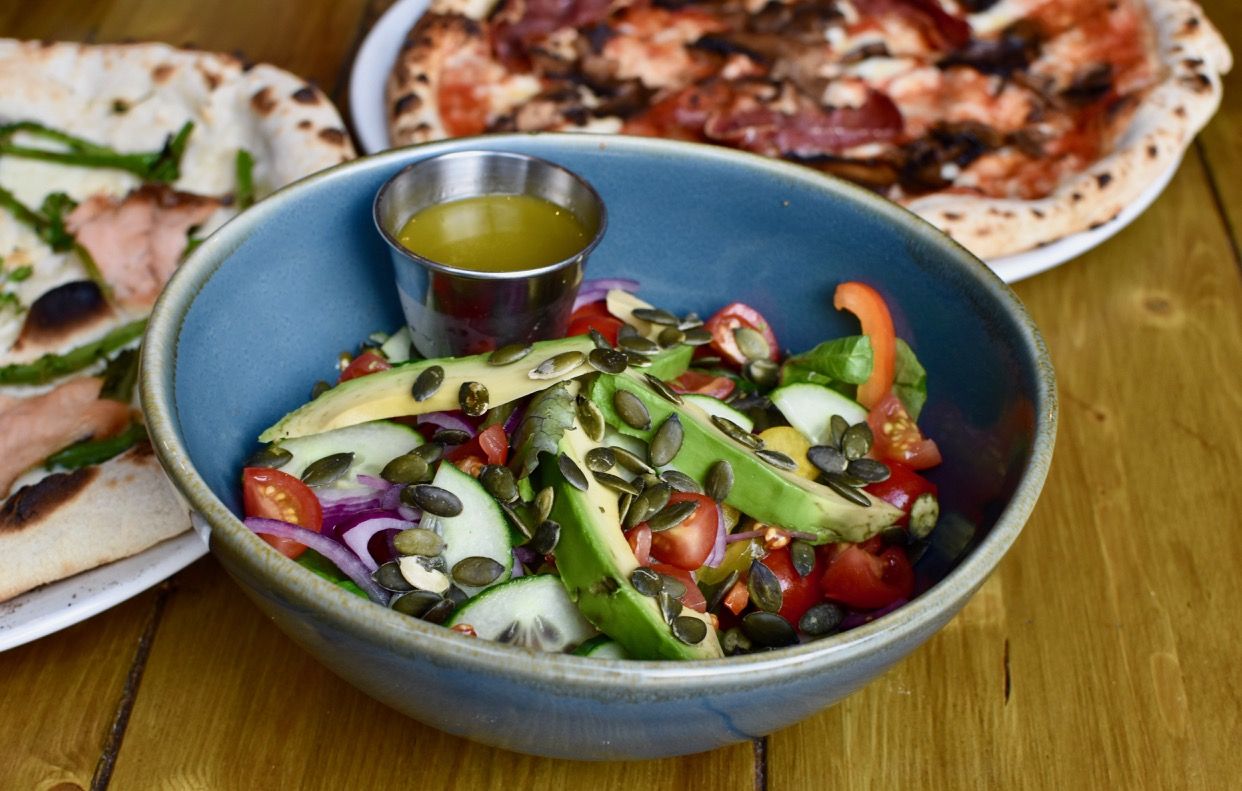 The pizzas themselves, when they arrived, were big, good looking and delicious tasting. The base was beautifully blistered and well-proven. 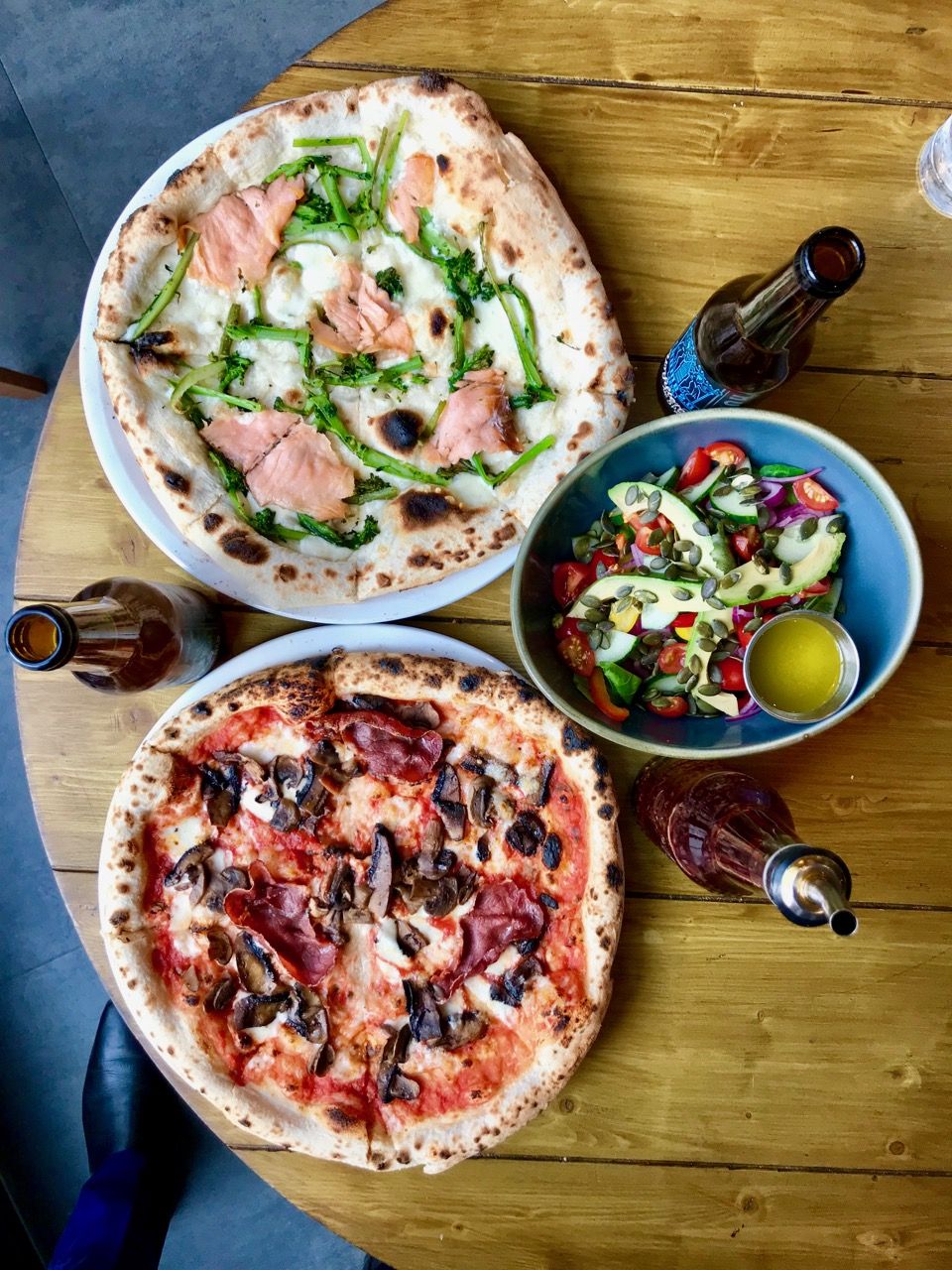 I had the Smoked Salmon (£12.95) – Fior di Latte Mozzarella, Broccoli, Ricotta, Smoked Salmon on a white base. True to form, all the ingredients were spot on and the combo worked beautifully. 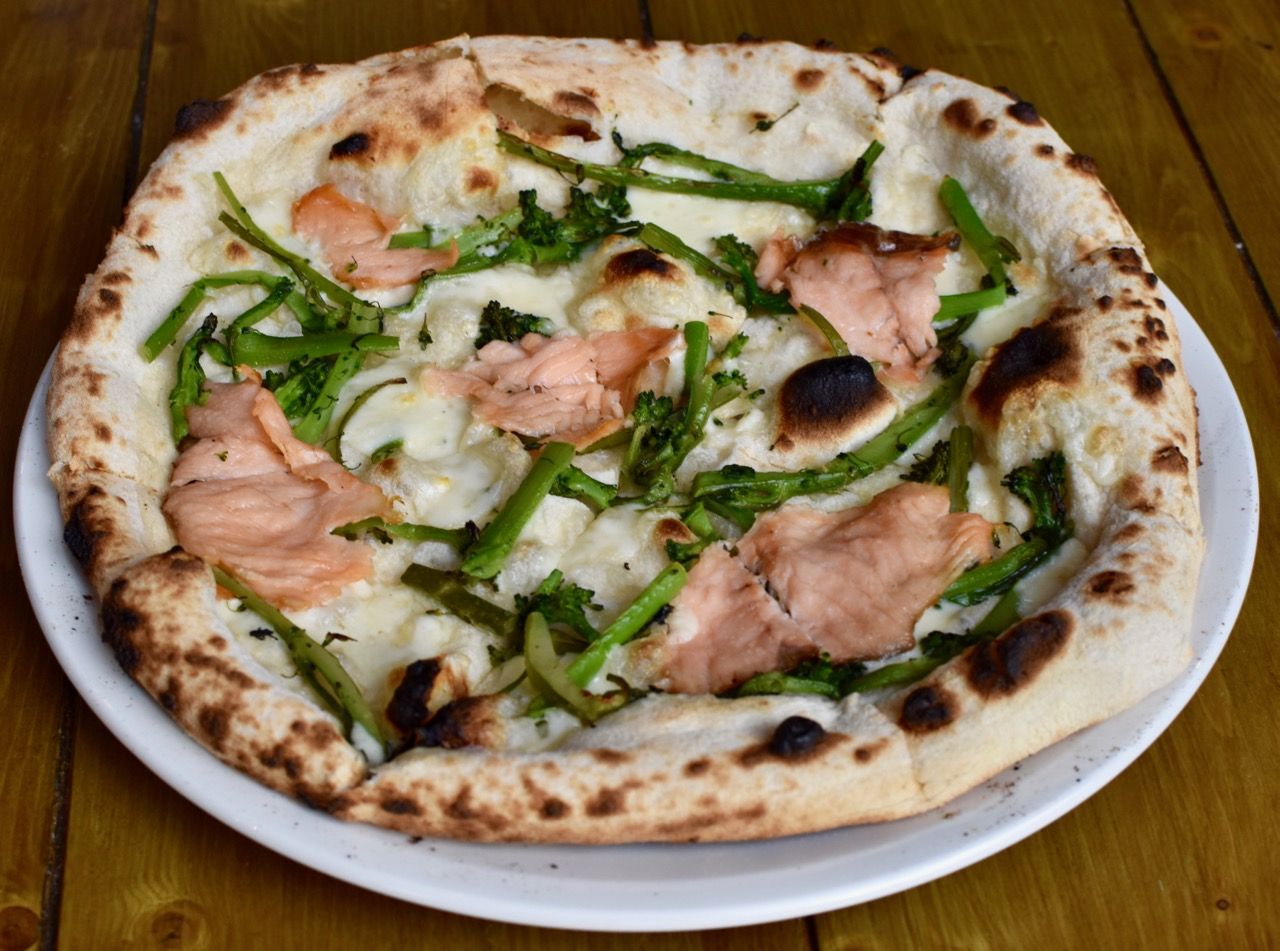 Kris had the Beef Bresaola (£13.95) – Tomato Sauce, Fior di Latte Mozzarella, Porcini Mushroom, Portobello Mushroom, Bresaola. It had a nice thin base, with meaty and earthy textures and tasted like a good pizza should. 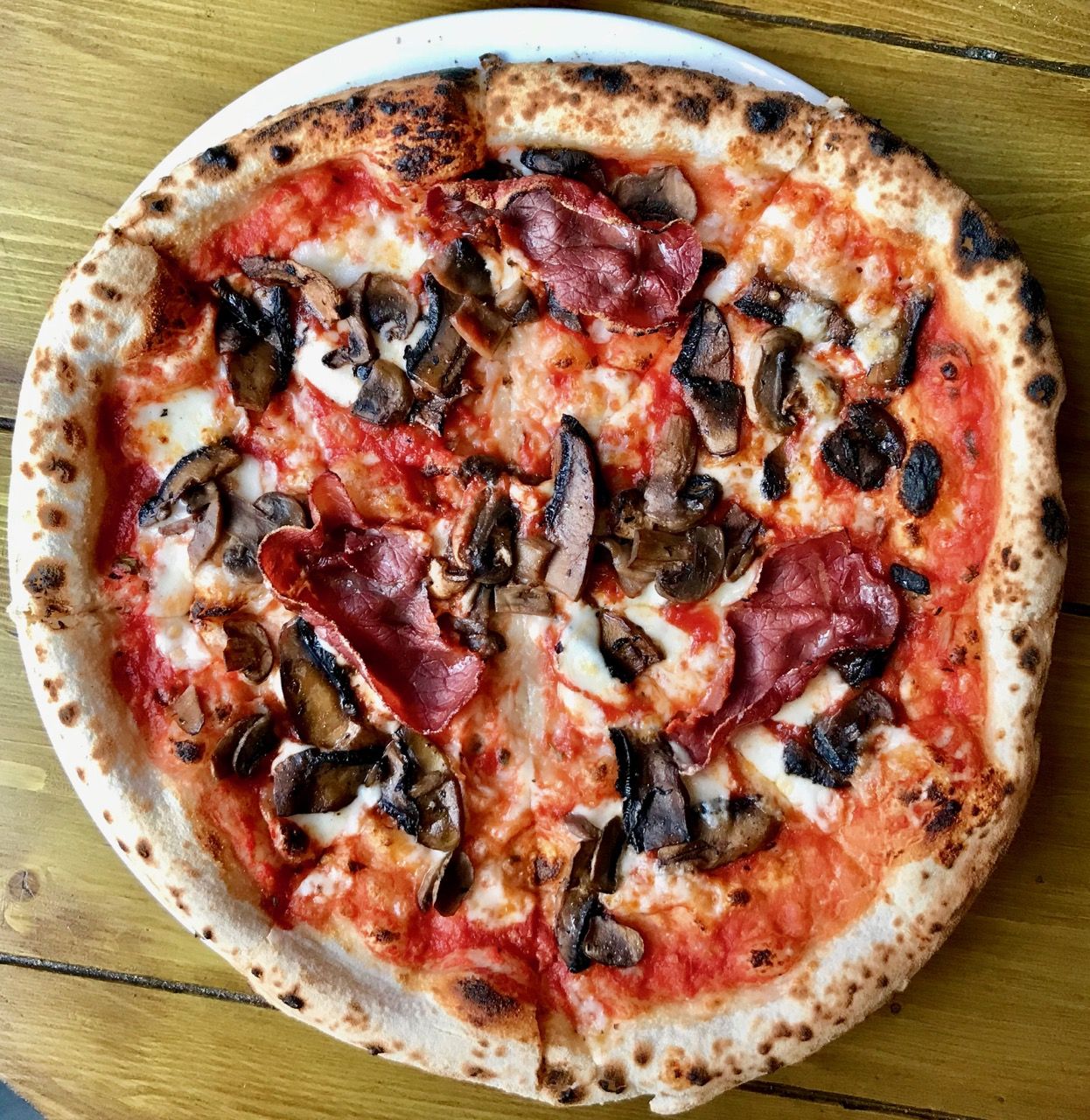 We were pleasantly surprised with the level of precision cooking and the quality of ingredients that goes into creating each pizza. The team have put heart and soul into every aspect of the place and it shows. Yes, at the end, it is still very much a pizza joint. But it’s the minute details that elevates it from the rest of the crowd. Zzetta’s efforts to interweave with the community are applaudable.

More information can be found here.

N.B. I was invited to review.

Get 50% off with Eat Out to Help Out Scheme